How to Read Piano Sheet Music: The Basics

If you’re like me and the sight of a treble clef makes you nauseous, you’ve certainly come to the right place. When I was first starting out as a musician, I would have done anything to avoid having to read a score. Now I genuinely can’t play without them – they’ve dramatically improved my playing ability. Learning how to read piano sheet music isn’t too different from learning a new language. At first, it can be overwhelming. One minute you’re feeling very French, ordering a croissant in your beret, the next minute you have a new pet fish called Liza. What I’m trying to say is that it requires a certain amount of practice, but once you’ve established the basics, you’ll have access to a whole new way of expressing yourself, a musical language, if you will.

We’re going to cover three important points to help demystify sheet music and make it more accessible for you!

A piano sheet music is made up of two staves, one above the other.

A stave is made up of 5 horizontal lines placed on top of each other on which the notes are written, either on the lines themselves or in the spaces between them.

Piano sheet music have two staves joined together by a brace. I’ll explain the differences between these staves in a bit.

Reading sheet music is like reading a book: you read from left to right.

But unlike what we’re used to, sheet music is read from the bottom to the top, as shown by the diagram below. 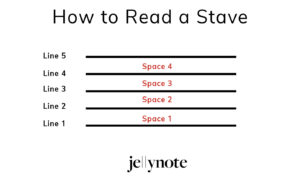 These lines and the lines between the lines (wow, very Inception) correspond to the white keys on a piano. Thus, the positioning of these notes on the stave shows you which key you ought to play on the keyboard.

As stated above, the staves are joined by a bracket. This means that they work in pairs.

As a general rule, the top stave shows you which notes to play on your right hand, and the lower stave does the same for the left. This means that notes placed one on top of the other are played simultaneously.

Check out this example, an excerpt from the beginning of the score of “Someone Like You” by Adele

2. How to tell the clefs apart

The clefs are those somewhat abstract symbols that can be found on the left of the score, at the beginning of each stave. They enable you to work out which note to play.

On the piano, we use the G key (for higher sounds) and the F key (for lower sounds).

Depending on the clef used, the notes on the staff will have different values. This brings us to the most important step in deciphering a score: working out the value of the notes according to the key.

The keys are easy to distinguish because they’re big and pretty distinct.

The relationship between the treble clef and the bass clef

You’ve probably noticed, on both clefs, the notes extend beyond the stave (e.g. C on the treble clef and E on the bass clef). This is because the notes go on forever.

Placed end to the end, the two staves meet at middle C. 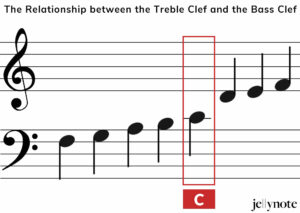 We got the beat

A bar is simply a regular temporal division of the score. It is enclosed between two vertical lines perpendicular to the stave called ‘barlines.’

‘The time signature determines how long a note lasts and when it is played.’

IMPORTANT: Note the use of sharps (#) next to the G and F keys. This is the key signature. You may also find flats (♭).

The key signature is really important when you start learning how to read piano sheet music. It tells us if there’s a change to the stave which we call an ‘accidental’

Take a look at this image of Adele’s ‘Someone Like You.’

The time signature is placed at the start of the stave, just before the first note. It is represented by two numbers, one on top of the other.

IMPORTANT: If the bottom number is a 2, the beat is in minims. If it’s an 8, the beat is in quavers. But don’t worry about that yet, almost all beginner scores are in 4/4. We’ll look at other time signatures in a future article.

To help you, here’s a table explaining the value of the notes you’ll find in a piano sheet music. 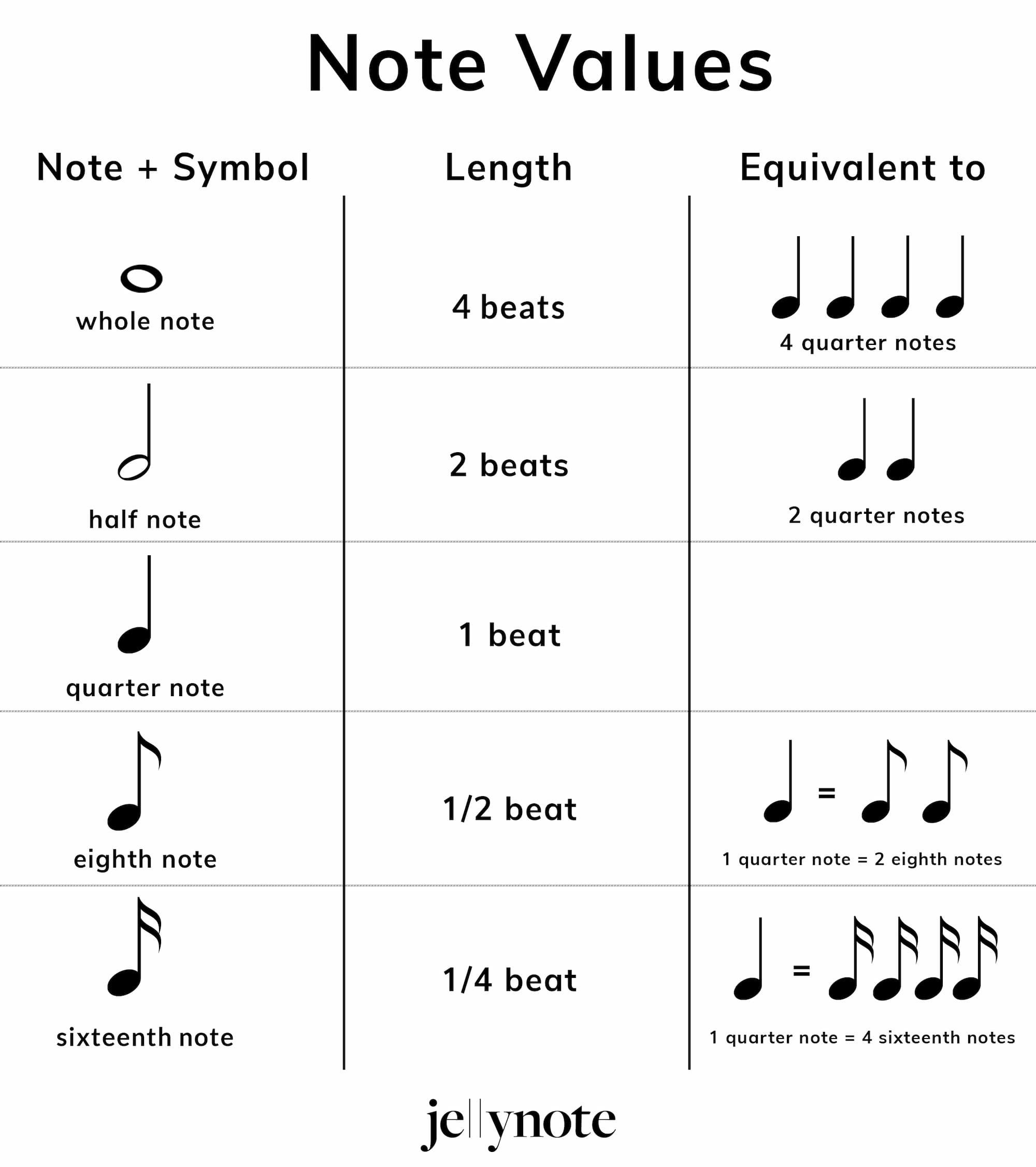 Take the time to familiarise yourself with these new symbols and their values. At first, you may feel a bit overwhelmed with all this information, but in time you’ll be able to read these notes without even thinking about it.

When you feel more comfortable with them, you can go onto the next step: rests.

It’s a length of time during which the musician stops playing. I.e. releasing the keys they had previously been holding.

Like all the notes that we’ve just discovered, rests are represented on a score by a symbol. 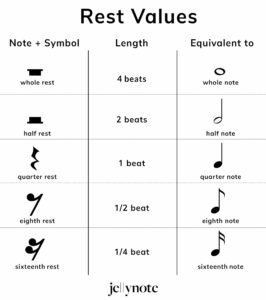 If you’ve got a good grasp on the different notes you find in a score and their length, you shouldn’t have much trouble understanding the values of these rests.

Basically, each rest has an equivalent note (as shown by this diagram)

So, a crotchet rest is a rest that lasts the same length of time as a crotchet, i.e. 1 beat.

If you’ve made it this far, check you! You should now have all the necessary skills to know how to read piano sheet music for beginners!

Feel free to print out the images if you want! They will be very useful and should help you digest all this new information! So what are you waiting for? Get practising!

Trust me, with a bit of time and some regular practice, you’ll get so used to doing it, it’ll just be instinctive!

Now that you’ve got the keys to deciphering a score, you can tackle the piano sheet music of Adele’s Someone Like You and check out all of our easy scores for beginner to intermediate pianists on Jellynote.

– Article written by Amy Cimpaye in its original version, translated by William  –

Acoustic vs digital, what is the best piano for beginners?

What are the different types of pianos?