In Conversation with Sarah Jeffery

In the Meet Our Musicians series, Jellynote introduces you to the Creators behind the sheet music on our platform. Discover their musical style and get to know them!

It seems fitting that, on International Women’s Day, I should get the opportunity to speak to a woman who is, quite literally, doing it all. Professional recorder player, with three degrees under her belt and appearances on the BBC, Sarah Jeffery is one to watch.

She rings me from her home in Amsterdam, where she lives with her husband (a clarinet player and saxophonist) and daughter, in a house that is both “beautiful” and, by her own admission, “falling down.” During our conversation, we chat about her extensive career in music and the changing perceptions of the recorder in recent musical history.

How She Got Started with the Recorder

Sarah has been playing the recorder for over 15 years, which prompts my first question. Why does she enjoy it so much?

Without a moment’s hesitation she begins: “It feels so natural to play. It’s a wind instrument, and there’s nothing between you and the instrument. No reeds, no embouchure. Every tiny change you make in your breath or your tongue or your fingers has a huge effect on your playing. So it’s a very expressive instrument. Though, of course, this is one of the reasons it’s so difficult to play…”

She explains the intricacies of the instrument, the need to find a perfect balance between blowing too much (which makes you go sharp) and blowing too little (which makes you go flat). It’s a very delicate balance to strike, one Sarah admits she hasn’t yet mastered. “It takes a lifetime to really master those subtleties,” she tells me.

That said, having studied the instrument at the conservatoire for nine years, Sarah certainly has a very impressive control over her sound.

We discuss her early interactions with music. She tells me that she started the instrument when she was six as a hobby. Her mother ran a recorder club at her primary school, which is where she was first introduced to the instrument. It was quite a casual commitment, she tells me. It wasn’t until she took her A-Level music qualification that she had the realisation that she could do this professionally.

Inspiration came in the form of her music teacher who, when Sarah expressed doubt at the prospect of realising her dreams of playing professionally, quickly assured her she was being “silly”. She was a very inspirational teacher, but also a tough one, who pushed her students and didn’t expect anything less than brilliant. Sarah recalls her teacher’s dedication to the music department: “She put so much work in. Every single break time and lunch she was conducting a different ensemble: orchestras, jazz bands, swing bands. I don’t think she ever had a break…”

“She helped show me all the different career paths that could be an option. If it wasn’t for her, I wouldn’t have dared apply for [music college]. It takes somebody to show you the way and demonstrate that it’s possible.”

And so, at age 17, bolstered by the belief of her teacher, Sarah applied to the conservatoire. And got in. “Quite a last-minute decision,” she reflects, “but the right one.”

At first, Sarah trained in Birmingham, where she did an initial BMus. She then moved to Amsterdam where she did a second BMus (this was compulsory to move onto the MMus). It’s an impressive education, though Sarah notes it would be impossible nowadays: “I started studying in 2003. Back then you basically didn’t pay tuition fees. When I started in the UK, tuition fees were £1100 a year, and that was subsidized by the government. Nowadays, if I had to do this, I just wouldn’t be able to afford it. These nine years of study altogether cost less than one year of study. So this made the decision to study music much easier.”

Hearing this, I can’t help but ask whether she thinks the industry has become less accessible in recent years, closing the door on those whose social background might not allow them to pursue such a competitive career.

“For me, as a clueless teenager, it didn’t feel like such a gamble since the tuition fees were only £500 a year. You’re more likely to give it a go. Nowadays that same degree would cost me £36000. You have to be really sure in that position. It makes it a lot more risky because that’s a huge amount of debt to go into…I don’t think I would have done it. I would have been too scared.”

Nowadays the recorder is a popular instrument among professionals and amateurs alike. Though this hasn’t always been the case. Sarah tells me about the reinvention the instrument has undergone during recent years, starting with Walter Van Hauwe, a recorder maestro based in the Netherlands, who had a step-by-step plan to ensure the recorder’s longevity and success as an instrument. This plan had four aspects: to introduce more performers into the mainstream who would inspire more people to learn, to train more teachers who would help bring in the next generation, to commission composers who would write scores for learners and to encourage recorder builders to construct high-quality instruments.

And where does Sarah factor in? What’s her role in the promotion of the instrument?

“That’s a good question,” she says, before proceeding to tell me about her YouTube channel, which currently boasts an impressive 145,000 subscribers. The ethos behind the channel is to demystify the recorder as an instrument. Sarah has made videos on a wide variety of subjects related to the instrument. For example, a video comparing a £30 and a £300 recorder, a video offering up advice to conservatoire students and one particularly humorous one in which she attempts to give her husband a recorder lesson. She also has tutorials on specific pieces, teaching students how to play a selection of music, such as the Jurassic Park Theme, Le Ray au Soleyl, O Virgo Splendens and Für Elise. It’s easy to see why her videos are so popular. Sarah is such a warm presence and it shines through so clearly; her passion for music is infectious.

“I wanted to teach people about the instrument and make it fun as well,” she tells me, “I’m bringing the recorder to a wider audience.”

Her Relationship with Genre

Browsing Sarah’s website, I find it difficult to assign her to a specific genre, her wide experience expressing her “can-do” attitude.

“I grew up playing folk music,” she tells me, “but I did my masters in contemporary music. This involved working with composers to create new pieces, working with electronics, working with actors in the theatre. I still love it, but I’ve definitely broadened since then…”

Nowadays she seems to do a bit of everything: performing with her rock band, Jerboah, and in a recorder consort, The Royal Wind, featuring 10 other recorder players, all of whom play from memory. She performs contemporary Renaissance music, pop, folk, musical theatre. “There’s no orchestra waiting for recorder players,” Sarah tells me, “so you have to be very proactive.”

The Future of Live Performance

The music scene in Amsterdam certainly enables this flexibility. “Pre-Pandemic, it was very active,” she tells me, “every night you could go out and see 50 different things.”

Though the scene is in jeopardy. The underground venues that formerly inspired musicians are closing, with a right-wing government in power that is less supportive of the arts. Sarah notes that the criminalisation of squatting has also lead to a more hostile attitude to the arts. In the past, squatting locations would serve as underground venues for musicians to play in. Now these venues have been cleared and “a lot of possibilities for grassroots music venues to start up and grow have been wiped out.” 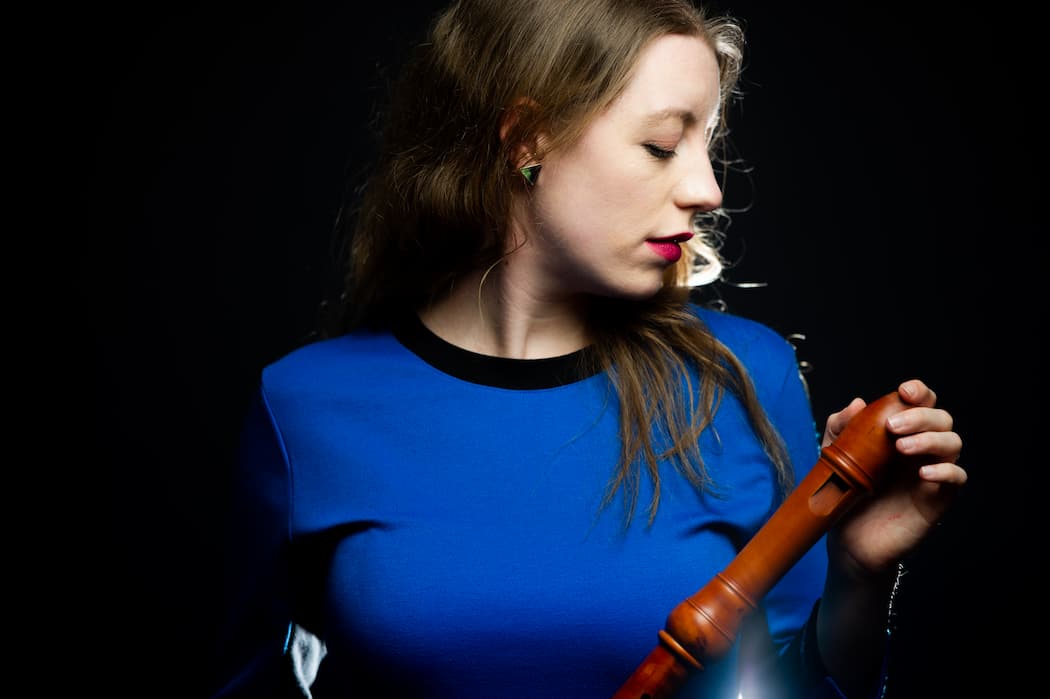 Sarah’s readiness to try new genres is likewise reflected in her transcriptions. Though I do note a certain penchant for popular culture, her impressive range including a variety of film and television soundtracks such as the Lord of the Rings, Game of Thrones and The Mandalorian.

Sarah focuses on pieces she knows will work well on the recorder. For example, Fairytale of New York with its iconic whistle solo. The Mandalorian, too, is great for the recorder, Sarah tells me, the original composer, Ludwig Göransson, actually using a bass recorder to render the low, rich sound of the piece.

Online Lessons and Her Work with the BBC

Sarah also teaches the recorder, offering online lessons. She has also started giving online courses for her YouTube subscribers. She has a four-week beginners and intermediate course, which involves live streams, resources, homework and personalised feedback.

Sarah was recently featured on Yolanda’s Band Jam on the BBC, an experience she describes as her “dream job.” The show’s ethos is to introduce children to musical instruments and inspire them with professional musicians. Sarah recalls when she first received the email from the BBC, describing it as “the craziest email [she’d] ever received.”

“This was two and a half years ago. I literally just had my daughter. She was five days old. And I got an email from the BBC telling me they’d found my YouTube channel and inviting me to be on the show. It was great!”

The filming experience was “intense”, but “a lot of fun.” Each episode has three segments: the interview, the showcase and a jam session at the end, all performed in front of an audience of children from local schools.

And her relationship with Jellynote?

Jellynote has allowed Sarah to share her scores with her pupils legally. “That’s the thing I really like about Jellynote,” she says, “it’s possible to publish the sheet music because you have the licensing.”

“Working with Jellynote means that the people who want to learn the music I’m putting out can access it easily,” she tells me, “they get good quality, legal sheet music. And the creators can earn money from it. Everyone wins.”

In Conversation with Michelle Alonso