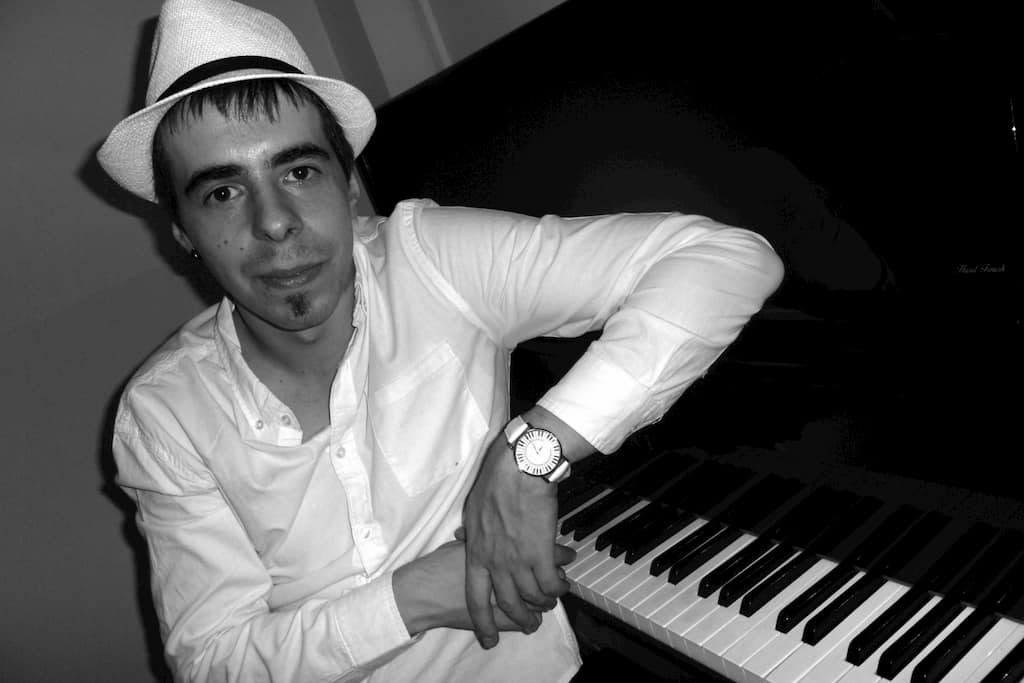 In Conversation with Pablo Enver

In the Meet Our Musicians series, Jellynote introduces you to the Creators behind the sheet music on our platform. Discover their musical style and get to know them!

By his own admission, Pablo Enver doesn’t come from a particularly musical family. His father dabbles with the acoustic guitar and his parents were always keen for him to hear classical music growing up, but that’s about it. Despite having no formal education (or perhaps because of this), Pablo decided to teach himself the drums. Due to his parents’ financial situation, however, they didn’t have the money to buy him a drum set. This didn’t stop him though.

“I just used some sticks to hit pots on my desk, and my slippers to hit the furniture with my foot as if it was the bass drum,” he says, fully aware of how ridiculous it sounds, “I had all the time in the world to practice at home”.

He never could afford to buy his own drum set and yet he managed to reach an impressive skill level, even starting a band with some school friends. This was through a lot of hard work, he assures me. Two hours practise every day, sometimes more if he felt particularly inspired by the piece.

“It becomes an obsession and you enjoy it so much that time passes so quickly. Suddenly you realise you’ve been playing for five hours and you didn’t even notice”

Pablo Enver, on how his love affair with music began, with manic look in his eyes.

Despite this very informal training, it did instil him with a sense of rhythm, which has served him well for his musical career!

➤ Check out Pablo’s Creator page to download his sheet music!

He attended the Isaac Albéniz Public School. It’s “not a big school, certainly not a conservatory”, he tells me. But it did give him a decent music education, allowing him an hour of music tuition every week, at a cheap price. During his school years he strayed from an actual instrument, embarking on a short-lived career as a DJ.

After finishing school, Pablo Enver completed his ‘grado medio’, or middle grade, in electricity, with a rough plan to become an electrician. Though he admits he didn’t really know what he’d end up doing.

‘It was a very confusing time for me,’ he tells me, ‘I was just thinking about going out there with my friends and partying to be honest. I studied electricity because it caught my attention and my friends did it too, but if I could go back, I wouldn’t do it.’

I sense this might be a difficult subject so return to the topic of his musical career, asking him which instrument he played next.

“It was about ten years ago,” he tells me, “I had to leave Madrid for work, and the company needed me in Ciudad Real, so I was there, alone, for more than a year. I felt completely alone and had recently broken up with my girlfriend so I needed something to avoid getting depressed. Money was no longer an issue so I finally bought myself a keyboard and a guitar.”

This led me to think of my own recent break-up, where I attempted to cut my own fringe. I can relate.

➤ Check out Pablo’s piano arrangement of City of Stars, the soundtrack of movie La La Land for the piano

The guitar was a bit too complicated to self-teach so instead Pablo Enver started learning the piano. He didn’t know how to read the scores so he just used Synthesia videos and played by ear. As well as teaching himself piano, he gained skills in harmony and composition. After returning to Madrid, he started attending a piano school, devoting hours every week to practising both instruments.

“It’s pretty amazing that you learnt so well without a teacher,” I tell him. I had one to one clarinet lessons for 3 years and I can barely hold the thing.

“I’ve always had a good ear for those things so it wasn’t very hard. I loved playing so the hours passed very fast,” he says modestly.

Nowadays his life is filled with more music than ever. He quit his previous job in repairing heating systems and now splits his time between a part-time job at the local supermarket and composing music the rest of the day. But his plan is to quit his supermarket job since he’s started collaborating with a large company in Spain called My Sheet Music Transcriptions that he hopes to work full-time for.*

He’s had a very successful career, but things might have been different if he’d chosen a different path at 16, when his music teacher, impressed by his ability on the drums, encouraged him to apply for a conservatory.

“I was stupid and I rejected it,” he says bitterly.

I probe him, asking why he made this decision.

“As I said, I was only thinking about one thing: living my youth to the full, partying with my friends all day. I was a very, very stupid kid.”

There were other factors as well though. He faced some pressure from his parents, who wanted him to pursue a ‘serious job’. To some extent, they still do.

“Most people think you can’t live from music if you’re not a rock star. Even now they’re scared of me quitting my actual job. But I have to take the risk and they understand,” he says.

It’s a risky business to be in, now more than ever with the threat of corona virus. I ask him about this, about whether he’s worried about job prospects in the current climate.

“That’s a very hard question!” he says, pausing for a moment before adding

“I don’t like 99% of actual modern music, so I don’t care if they all just disappear”

“Of course, with music you never know what’s going to happen, but I’m not very worried about what I’m doing now because we’re very lucky, thanks to the Internet, to work with people from all around the world. So as long as the entire world doesn’t get destroyed, the work will probably keep coming.” He’s joking, of course, but given the way things are going I wouldn’t be surprised…

I’m curious as to what inspires him to transcribe music. I’m expecting some sentimental story about his grandmother transcribing their favourite song before she died or something…

“I don’t need inspiration. I take it as a job. Sometimes I transcribe music that I like and sometimes I don’t like it, but have to do it anyway.”

I was not expecting this.

“Whether I like it or not, it always helps me to improve my skills so it’s welcome.”

That said, he is passionate about video game music. He’s been playing video games since he was a child, so the classic tunes like Mario Bros and Tetris are very familiar. His favourite, however, is Final Fantasy. These were some of the very first pieces he learnt when he started playing piano.

“I found a music book with a collection of Final Fantasy music and I just loved it!”

➤ If you’re a video game nerd yourself, check out our collection of the best video game songs to play on your instrument.

Any tips for aspiring musicians who want to get good at their instruments?

“The best advice is to learn harmony and music theory. Many people just play piano or guitar but don’t study music theory. For me, that makes a big difference. Playing piano is not just hitting the right keys, it’s so much more than that.”

Being a sheet music company, we cannot agree more to that. Cheers Pablo!

➤ Want to improve your music theory? Check out our article on how to read sheet music

There’s still work that needs to be done, Pablo assures me. He hasn’t quite mastered the piano yet. There are a lot of things he needs to improve on; he particularly struggles with fast arpeggios and scales or rapid chord changes or jumps….but he’s getting there! If he’s this good as an intermediate, I’m excited to see what he’ll be able to do in a year’s time!

If you could invite three musicians, dead or alive, to a dinner party – who would it be and why?

I would invite Nobuo Uematsu because I just love his music for video games. He’s one of the composers that I like the most!

I would also invite J.S. Bach because he is absolutely the best musician there has ever been and there will ever be. His music is just mind-blowing.

And the third… I don’t know… maybe Mozart because he was probably a very fun guy!

What songs do you listen to when you’re happy?

When I’m happy, I listen to some reproduction lists that I have, with songs like “A fuego lento” (Rosana), “Fado Boemio y Vadio” (Piedade Fernandes), or just video game music that I like.

And when you’re sad?

When I’m sad I listen to Flamenco music. I find it very moving.

What is your favourite music memory?

Good question! When I was a very young child, maybe 4 or 5 years old, I had a mini toy keyboard and I played it a lot, so much that I still remember the melodies on it and I haven’t heard them for over 25 years!

*In the weeks since this article was written, Pablo Enver quit his job in the supermarket and is now pursing music full time!

You can find out more about Pablo, as well as his services, by heading over to his website.

How to Read Piano Sheet Music: The Basics