In Conversation with Jonathan Dimond

He had previously been exposed to this style of music by the listening habits of his parents, who were avid fans at the time. They owned an extensive record collection, encompassing artists such as Louis Armstrong and Stan Kenton.

Jonathan’s first instrument was the trombone, though this was not his first choice.

Flashforward however many years, he is glad he didn’t get his way.

“The trombone gives you a perspective, an internal perspective that really benefits you as a composer and an arranger. It allows you to see music from the inside,” he explains.

As a child, he was an obsessive musician, determined to get into the band at his school. This was a competitive band and thus, not an easy feat. He would practise every day without fail. As an adult, this obsession has remained constant. Though his time-keeping skills have not…

Jonathan is a few minutes late to our interview. He calls me and apologises, struggles with his camera and explains to me that he has just come from his children’s piano concert. He tells me they played very well.

Jonathan Dimond has had an impressive career, which has taken him all over Australia and the world. Like most exception musicians, this career took root when he was a teenager.

“They were all older than me. I was the band leader,” he says with a look of smugness on his face. He proceeds to tell me that his sister, who is 3 years older than him, and whose rivalry helped ignite his passion for music, was also in the band. I can understand his smugness.

At age 16, he entered a school for talented music students.

It was at this point that his musical career took a professional turn as he began to play for cabaret shows, performing 4 nights a week throughout his high school and college years.

“It’s through that experience I learned a lot about arranging, composing…” As he tells me this, I become retroactively concerned for his teenage self, but Jonathan assures me that while “there were all sorts of characters in the industry (and still are), I had clear boundaries, I never fell victim to some of those things.” 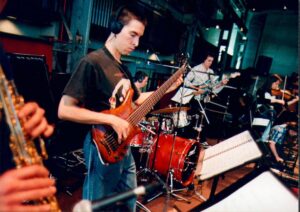 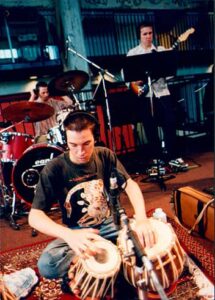 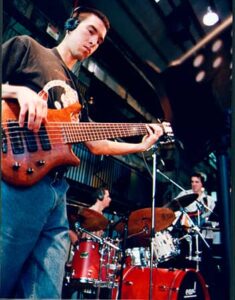 At age 18, he did a bachelor of music in classical trombone performance at the Queensland Consevatorium of Music. He then started travelling, or rather “tripping around”. First, Europe. Then, the United States, where he eventually ended up in Boston and started studying at the New England Conservatory, first for his Graduate Diploma, later for his Masters, both in Contemporary Improvisation.

➤ Applying to music schools this year? Check out our guide on how to ace the audition.

He later returned to Australia and began teaching at the Queensland Conservatorium of Music, where he ended up running the degree in jazz studies for 7 years. Stints in Los Angeles and back in Boston were followed by a return to Australia where he lectured at Box Hill TAFE and NMIT/Melbourne Polytechnic, which brings us to the present day.

Another degree later, this time a PhD in Composition (has anyone else lost count of how many degrees?), he can now be found in Melbourne, with his wife and two children.

He makes a point of saying that balancing the two lifestyles (musician and father) is by no means easy.

“It’s very hard on spouses and on kids. Definitely not a lifestyle I’d recommend to anyone,” he explains.

I press him on this, to which he responds:

“A musician’s life is quite an unbalanced thing. You have to be obsessive to be a musician. That gets the better of you sooner or later. I’ve got friends…very close musicians whose health is very poor as a result, whose relationships are very poor as a result. That’s just part of the lifestyle unfortunately.”

Jon Dimond, professional musician, on what it takes to be a musician

Luckily, Jonathan Dimond has found some balance, and ways for his two identities to interrelate. Mainly by sharing his love of music with his children. He has taught them both piano. He can be strict; enforcing daily practice of at least 20 minutes. But, according to him, the benefits have been immense, both on their social and academic development.

Plus, seeing his daughter play trombone for the first time was “very cute.” A circle of life moment, you might say.

Another conflict Jonathan experiences is that between the two styles of music which most inspire him; jazz and Indian. Though in this case, he thrives on the challenge. He was first exposed to Indian music at a Hindustani concert he attended in Brisbane. He enjoyed the resemblances to jazz (i.e. soloing, grouping, cyclical forms, improvisation etc). But was inspired by the differences. Consequently, he chose to attend a conservatoire with a department dedicated to Indian classical music.

“Music is a universal language…” he begins, before quickly adding “that’s not true. But it is true that they use certain physical parameters that are the same. You revel in the difference. We are designed to resolve these differences.”

Referring to his “cabaret days,”, he remarks that “it’s an opportunity that my students sadly don’t get. The world’s changed since those days.”

“I sound like an old fogie”, he says apologetically with a half-smile.

“Then the Internet came in. It ate away at the live performance opportunities.”

This uneasiness towards technology is reflected in his every-day life. Jonathan doesn’t own a television, and only recently bought a mobile phone out necessity, after 12 years of not having one.

“I wanted that silence. I disconnected so I could do my work. I’m very unusual with that kind of obstinate self-obsession.”

➤ You can download Jonathan’s sheet music for Footloose by Kenny Loggins here.

For many artists, social media has become a way of getting “discovered”, but Jonathan is happy to remain undiscovered, at least on a global scale.

“You see the results of fame on all sorts of people. David Bowie, Michael Jackson…these are unhealthy individuals. And we’ve lost a lot in recent years. Sadly, they fall victim to the influences…”

Jonathan Dimond is the opposite; a talented musician, who may not have billions of Twitter followers, but who does have a dedicated fanbase. He is healthy and happy, if not a tad bit paranoid about the dangers of social media.

“It runs in the face of good old fashioned, messy, surprising random human interaction,” he tells me, “that’s why I think live performance is an artistic necessity. It’s a part of our cultural fabric.”

Perhaps he’s right. Maybe all we need to be better artists is “a bit of unplug time.”

You can catch Jonathan Dimond at one of his upcoming gigs, the details for which can be found on his website.

➤ You can find more of his arrangements on his Jellynote creator page.

In Conversation with Oriol López Calle

How to Hold a Bass Guitar : A Guide for Beginners