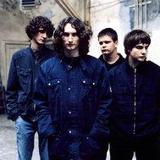 Today While the Blossoms Still Cling to the Vine

The Music
Sheet music for Getaway with electric guitar, bass and drums