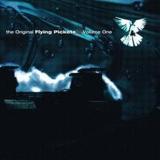 The Original Flying Pickets, Volume One
Sheet music for Only You with Acoustic Guitar