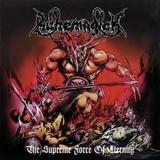 The Supreme Force of Eternity
Sheet music for The Black Wall with electric guitar, bass and drums