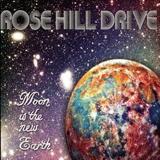 Moon Is the New Earth
Sheet music for Sneak Out with electric guitar, bass and drums