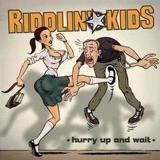 Hurry Up and Wait
Sheet music for I Feel Fine with electric guitar, bass and drums