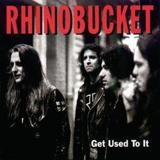 Get Used to It
Sheet music for Ride With Yourself with bassoon, electric guitar, effects, drums and bass