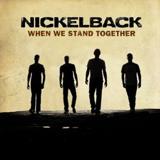 When We Stand Together

Feed the Machine
No Fixed Address
Million Miles An Hour
Edge Of A Revolution
What Are You Waiting For?
She Keeps Me Up
Make Me Believe Again
Satellite
Get 'Em Up
The Hammer's Coming Down
Miss You
Got Me Runnin' Round
Sister Sin
Here and Now
This Means War
Bottoms Up
Sheet music for When We Stand Together with drums, electric guitar, bass, acoustic guitar and tenor

Midnight Queen
Gotta Get Me Some
Lullaby
Kiss It Goodbye
Trying Not to Love You
Holding On to Heaven
Everything I Wanna Do
Don't Ever Let It End
Dark Horse
Something in Your Mouth
Burn It to the Ground
Gotta Be Somebody
I'd Come for You
Next Go Round
Just to Get High
Never Gonna Be Alone
Shakin' Hands
S.E.X.
If Today Was Your Last Day
This Afternoon
All the Right Reasons
Follow You Home
Fight for All the Wrong Reasons
Photograph
Animals
Savin' Me
Far Away
Next Contestant
Side of a Bullet
If Everyone Cared
Someone That You're With
Rockstar
Someday (acoustic live)
The Long Road
Flat on the Floor
Do This Anymore
Someday
Believe It or Not
Feelin' Way Too Damn Good
Because of You
Figured You Out
Should've Listened
Throw Yourself Away
Another Hole in the Head
See You at the Show
Silver Side Up
Never Again
How You Remind Me
Woke Up This Morning
Too Bad
Just For
Hollywood
Money Bought
Where Do I Hide
Hangnail
Good Times Gone
The State
Breathe
Cowboy Hat
Leader of Men
Old Enough
Worthy to Say
Diggin' This
Deep
One Last Run
Not Leavin' Yet
Hold Out Your Hand
Leader of Men (acoustic)
Curb
Little Friend
Pusher
Detangler
Curb
Where?
Falls Back On
Sea Groove
Fly
Just Four
Left
Window Shopper
I Don't Have
Hesher
Where
Window Shopper
Fly
Truck
Left
In Front of Me
D.C.