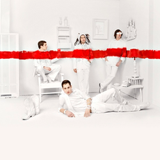 Don't Ever Tell Locke What He Can't Do

Red Eyes
Lighters
The Glasshouse
The Red Tree
Sheet music for Don't Ever Tell Locke What He Can't Do with clarinet, flute, electric guitar, drums and bass

If Tragedy's Appealing, Then Disaster's an Addiction
Bleed and Blister (version 3)
The Day No One Needed to Know
This Is All Bigger Than Me
The Frightening Reality of the Fact That We Will All Have to Grow Up and Settle Down One Day
The Politics of Living and the Shame in Dying
The East Has Stolen What the West May Want
Seasons Fade... Fevers Rage... It's a Slow Decay
There Are a Million Reasons for Why This May Not Work... And Just One Good One for Why It Will
The Song I Swore to Never Sing
Saying Something You Have Said Before: A Quieter Side of Moneen
Prepare Yourself... The Worst Is Yet to Come
This Is All Bigger Than Me
A Million Reasons
East Has Stolen
The Song I Swore Never to Sing
The Switcheroo Series: Alexisonfire vs. .moneen.
Passing Out in America
Accidents Are on Purpose
Tonight, I Am Going to Wash the Hippy
Sharks in Danger
Bleed & Blister (version two)
Charlie Sheen vs. Henry Rollins
Are We Really Happy With Who We Are Right Now?
Are We Really Happy With Who We Are Right Now?
Sheet music for Start Angry…End Mad with electric guitar and bass

To Say Something That Means Nothing to Anyone at All
With This Song I Will Destroy Myself
Closing My Eyes Won’t Help Me Leave
I Have Never Done Anything for Anyone That Was Not for Me as Well
How to Live With the Thought That Sometimes Life Ends
Life’s Just Too Short Little Ndugu
Thoughts Weigh Heavy…Don’t Get Drowned in the Weight of It All
The Last Song I Will Ever Want to Sing
The Theory of Harmonial Value
The Start to This May Be the End to Another
A Realization of How It’s Always Been
What Did You Say?… I’m Sorry, My Eyes Are on Fire
Half Empty? Half Full? I Never Got a Glass to Start With
What the Weatherman Forgot to Tell You
No Better Way to Show Your Love Than a Set of Broken Legs
Why Bother Wondering When Wondering’s All You Got
The Passing of America
I Wish I Was There to See the Way It Was Supposed to Be
Tonight, I’m Gone…
[untitled]
Smaller Chairs for the Early 1900s
How Many Other Girls Are There in the World Anyway?
Wrath of the Donkey (remix)
The Passing of America
This Year I've Had Enough