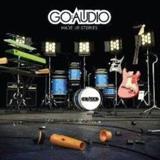 Made Up Stories
Sheet music for She Left Me with Piano, Electric Guitar and Drumset