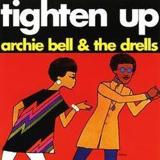 Tighten Up
Sheet music for Tighten Up, Part 1 with drums, bass and acoustic guitar