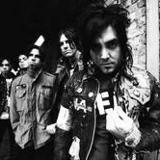 We Have Come for Your Parents
Sheet music for Justified with electric guitar, bass and drums